Being a guest on Teri O’Brien’s radio show was one of the best “media” experiences I’ve ever had.

I’ve “appeared” on MSM shows that were far less professionally executed, for one thing, which is a credit to Teri since she does everything herself.

She was also a delight to talk to, more like a funny, friendly conversation over coffee than an interview.

So I was pleased when she sent me a copy of her new e-book, The ABCs of Barack Obama.

Mischieveously subtitled Understanding God’s Greatest Gift to America, the book helpfully gathers all the scandals and stupidities of the last six years in a single tome, in chapters from “Affirmative Action” to “Zero.”

Here’s a sample from the introduction:

“Understanding the events of the last six years will require many of you to disabuse yourself of some of the prejudices and pre-conceived notions you have about Barack Hussein Obama. I know about those because I also used to think that he is nothing more than a jug- eared, unaccomplished, narcissistic empty suit with a history of drug use, unsavory personal associations, and a philosophy completely at odds with that of the Founders of this great country. Some of you no doubt still believe that this remarkable man had virtually no accomplishments or obvious qualifications for the office of President, and that the media has enabled an obvious failed experiment in on-the-job training by covering up his many screw ups by distracting the public with stories about celebrities behaving badly, severe weather, adorable animals and any other shiny object they could dangle in their faces to keep them from connecting the dots, until their bobbysoxer crush was safely re-elected, and in a position to complete his promised “remaking” of America. If you think that stuff, read on and get your mind right.”

The book is also FREE as a Kindle download for an extremely limited time (and even after that, it’s a steal at $1.88)

Check out the reviews at Amazon while you’re there. Teri O’Brien has a lot of fans — deservedly so.

UPDATE — Get your Teri O’Brien t-shirt too, created by our friends at HollywoodLoser! 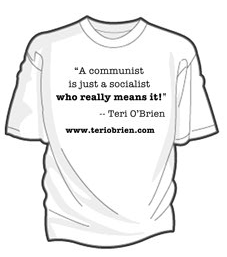 « Hannah Arendt and the evil of banality
Jim Goad: Get me to the white privilege conference on time! »